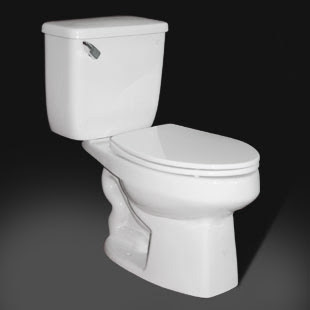 Not of the potty training type, I know what you're thinking. No, Nate likes to flush the toilet. We let him do it once or twice since it is a good way to introduce the subject of "the potty" what its for, what we put in there, etc.

This morning while I was blowing my hair dry I was, admittedly, not paying that much attention to what Nate was doing. He wasn't trying to swim in the toilet so I figured he was ok.

Apparently, what he was doing was taking vast amounts of toilet paper off of the roll and putting it in the toilet. Then he did what he LOVES to do and that was flush. This is when I took notice of the goings on (unfortunately, not the goings down, if you know what I mean). After exclaiming "Nate, what are you doing?!" (as if that was going to do any good), I noticed that the water level in the bowl was slowly rising. I was dressed for work and, as always running late, so a flood in the bathroom was not on my agenda for today. I watched for a minute hoping that the situation would just resolve itself, but as the water approached the rim of the bowl I knew I was going to have to intervene.

So, I plunged my hand in and pulled out the massive lump of toilet paper. The water went down, crisis averted. Now, let me just state, for the record, that everything was clean. There was nothing in the bowl but clean water and paper (OH THANK GOD!!!), but it is still a little unnerving having to put your hand in there.

The moral of the story... Nate and I are not allowed in the bathroom without supervision!
Posted by Molly at 3:52 PM