On Love and Help

We have been trying to get Nate to say "I love you" when we say "I love you" to him. Most of the time, with prompting he will say something close to "love you" in the cutest little voice ever! (Really... cutest EVER!)

So yesterday he was sitting on the top of the stairs (Jon was with him) and I decided to crawl up the stairs and "tackle" him. I was hugging him, kissing his neck and saying "I love you," "mommy loves you" etc. I stopped and asked him to take out his bink and say "love you." He took out his bink, looked at Jon and said "Help!"

I have NEVER laughed so hard.
Posted by Molly at 8:20 PM 1 comment: 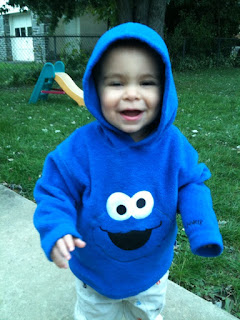 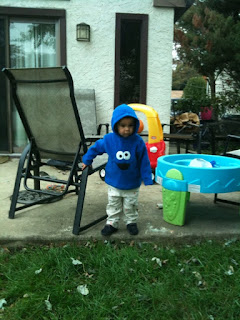 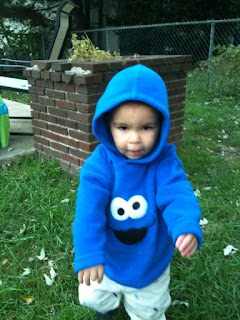 A Week of Firsts

This was a big week for Nate.

And one funny incident to report:

I put Nate in his crib for his afternoon nap. He wasn't really tired so I wasn't really surprised when he didn't fall instantly asleep. He was talking to himself and then he started to call for me. He was pretty persistent about it so I went up to check on him.

I found him plastered into the corner of his crib. He had lines up all of his binkies (pacifiers) on the window sill and he was infront of them, almost guarding them. He was pointing to something on his mattress, obviously distressed. It was then that I noticed he was sans diaper (whether he took it off or it fell off on its own remains to be seen). I THEN noticed that what he was pointing out was poop. Apparently he had felt the urge to go after the diaper was off.

I got him cleaned up and rediapered, stripped the bed and remade it. It was only when I was putting him back in his crib for his nap that I realized he had "rescued" his binkies and gotten them to the safety of tte window sill so that they wouldn't get poop on them. He had then put himself between his most treasured possesions and the danger. It was hysterical to think that in Nate's world is is "Women, Children and Binkies, first!"
Posted by Molly at 8:48 PM 1 comment: