Posted by Jonathan at 9:42 AM No comments:

Nate had his 7 month check up yesterday with Dr. Bullock. He weighed in at a whopping 18 pounds and 26.5" long. I knew he had gained weight, but 2.5 pounds in a month was more than I expected.

He was otherwise in great condition both physically and developmentally, which did my heart good to hear.

This was a tough month for Nate. He was in the emergency room at A.I. Dupont twice for what turned out to be a nasty case of constipation (who knew? the kids poops four times a day!). To get that diagnosis however he was x-rayed and poked and prodded, and stuck 10 times trying to get an IV started (which they never did his veins kept blowing out). He had an NG tube put in, was given an enema... it was a very traumatic time.

After we got the constipation under control Nate got brochitis and was on antibiotics for a week.

So you can imagine how excited I was to hear that he had grown, gained weight, and was healthy!
Posted by Molly at 9:54 AM 1 comment:

Look who's happy to play in his crib this morning.

We walk into Nate's room to find the crafty little tyke making a breakout when the guards aren't around.  Just pulled himself up, and when we walked in, appeared to be waving to us.  I ran to get my camera before he fell (Molly was there supervising).

Needless to say we lowered the crib mattress a notch.  I'm thinking we'll be lowering it to the bottom tonight, just to be proactive.
Posted by Jonathan at 10:30 AM No comments:

Nate isn't officially crawling yet, bue he gets where he wants to go... in this case to the camera. 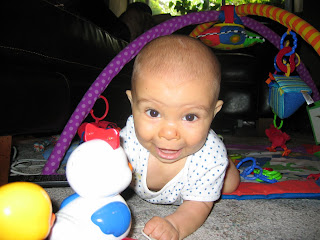 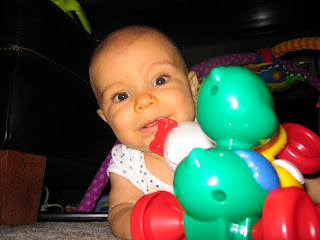 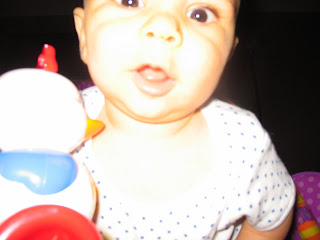 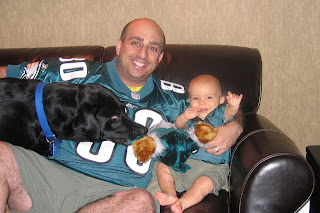 The excitement was too much for the little guy and he
conked out before the first quarter was over. 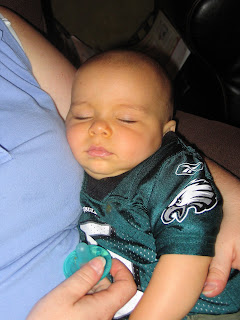 Master of the Shopping Cart 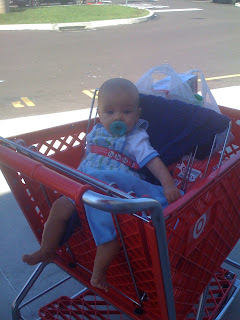 This is the first time Nate rode in the shopping cart like a big boy!
Posted by Molly at 7:47 PM No comments: