Yesterday Nate decided to stop calling me "mama" and start calling me "mommy." More specifically "my mommy" either in reference to me or to Ina Garten, The Barefoot Contessa, (we have the same haircut). It is super cute to hear but it also means that he is growing up... {{sigh}}
Posted by Molly at 11:59 AM No comments:

Yesterday my mom and I made a "quick" trip to Lancaster to do a little outlet and fabric store shopping. Shopping with a toddler is an "interesting" experience. A lot less time is spent shopping and a lot more time is spent taking breaks... luckily for us there are a lot of playgrounds and petting zoos to keep Nate entertained.

Starting out the day right... on the slide

Meeting a Pony... he reached right up and stroked his mane
(mommy was SO PROUD)

Towards the end of the day... resting in the shade

All tuckered out on the way home

Nate received a couple of belated birthday gifts recently, one of which was a tool box. He LOVES it! Here is Mr. Fix It in action. 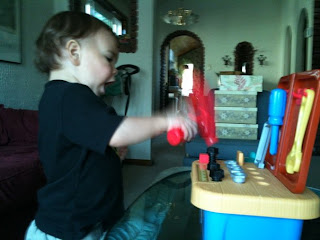 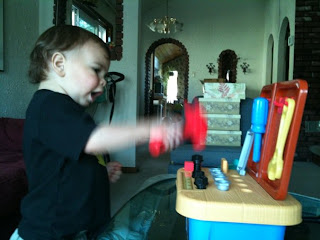 Yesterday Nate woke up from his nap early. I was in the middle of making cinnamon buns so I gave him some books to read in his crib while I got the cinnamon buns in the oven to rise.

When I went back up to get him out of his bed he looked at me, cocked his had to the side and with arms outstretched (palms up) he asked "Where go mama?" I asked him if he wanted to know where mama went and he said no. So I asked his what it was he was looking for and he put his finger up his nose. "Nate, did you lose a booger?" and he looked at me and said "Yeah mama... where go?"

I was laughing too hard to answer him yesterday but today I can say, "I don't know where your booger went Nate... and I'm not going to start looking now."
Posted by Molly at 8:34 PM No comments: