There are lots of things that people don't tell you about being a parent... like how much fun it is, like how much you can love another human being, like how quickly things can go all pear-shaped. That brings me to the story of last week or how we spent a night in CHOP (Children's Hospital of Philadelphia).

On Monday I took Nate to my cousin's house for a play date. He was fine, he had a great time. After nap that day I took his temp and it was 100.5. That and a tiny cough made me call the doctor and get an appointment for the next day. I figured he was going to tell me it was nothing but with all of this H1N1 paranoia I thought better safe than sorry.

On Tuesday I took Nate to the Drs. Out of nowhere he had a temp of 101.7 and the doctor heard wheezing in his lower right lung... pneumonia was the diagnosis. Two scripts for antibiotics and we were off. I stopped at the pharmacy to get the antibiotics and for the first time I could tell that the little guy didn't feel well. I took him home and put him down for an early nap.

The ER staff is great and the Doc there says it sounds like the croup but since our Doc had said pneumonia to get a chest x-ray. The X-ray shows what could be a beginning pneumonia so they start Nate in IV antibiotics. Then there are two breathing treatments, then there is the shot of steroids. They test him for the flu and it comes back negative. Then they decide he needs to be observed overnight but this hospital doesn't have a pediatrics floor so we will need to be transfered to another hospital... we say CHOP. It is one of the best in the nation, so away we go via ambulance.

CHOP was fantastic. He gets more antibiotics, two doses of tamiflu and finally they give him some motrin because his fever is still at 102. In the meantime they suck out some snot to test and find out if it is the flu (even thought he already tested negative) or some other virus. The motrin kicked the fever, he tested negative for the flu again, but did test positive for parainfluenza, which is the leading cause of the croup. Oh,and the pediatric radiologist said there was no pneumonia present on the x-rays... YEAH!

By Wednesday about mid morning Nate was beginning to act like his old self again and since treatment for croup includes breathing treatments and steroids, both of which he got in the ER, we were good to go home.

Hospital stays are not something you really want to remember, but I did think it was funny that Nate was eating his Cheerios with a fork, so I took some pics of that. 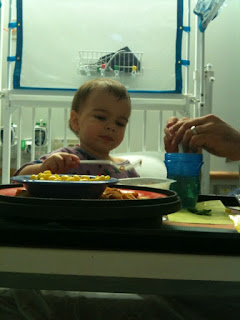 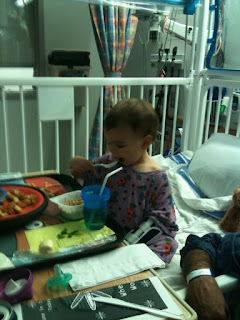 We were back at the doctors on friday and nate got a clean bill of health. He is back to his normal crazy self and tearing up the house... thank god!
Posted by Molly at 1:50 PM

oh my goodness! I am so glad to hear he's doing better and back to his normal healthy cuteness!